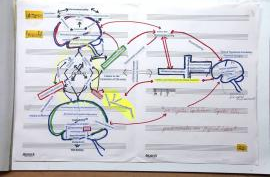 A shift in perception geared through the condition of aesthetic autonomy is often claimed to transform all life in the swirl of relations, from the neurons in the brain to the buildings that we inhabit and the principles and laws around which we commune. Evolutionary change will come through aesthetics since aesthetics permeate consciousness. But is it possible to claim access to perception without conception? How would reason be accounted for in the rubric of aesthetic autonomy when it would seem that a thought of difference in the image, is also a difference that is required of the configuration of thought itself.

This essay explores the tenability of functional distinctions between aesthetic autonomy and change, examining the contradictory identities of instrumental rationality and pragmatic naturalism; an avant-gardist aesthetics and an evolutionary aesthetics that lurk within descriptions of image-power and that have been conducive to art’s critique. If images are participants in the mass complex of connected networks, pathways, biology, material and ideas, then what are the consequences of insinuating this special task of change to art and how does this avoid the fate of the artist as mere consumer of capitalistic advancement? If art is to take its place in the political, does it require a new conception of its identity under which it would operate?