The Host: The Friend 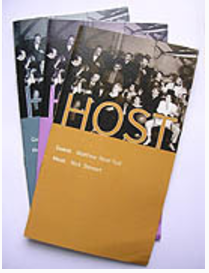 Transmission: Host is a series of chapbooks derived from an annual lecture series organised by Fine Art at Sheffield Hallam University. Each week a host invites his or her guest and a critical engagement is assumed. There is an ethics of hospitality: a host has a standard of conduct, and historically, hospitality has been seen as a code, a duty, a virtue, and a law. In 2009–10 we took up the idea of the friend. In the course of a life, friendships change but this is not to say that friends are interchangeable. What kind of friendship is possible between artists, between works of art, between men and women? What is a real friend? A dream from which one wakes to say, after Montaigne, who says it after Aristotle: O my friends, there is no friend.