Realism and its Discontents: Determinism Noir 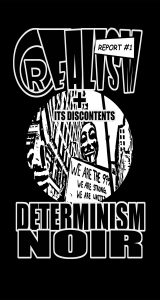 This short comic based narrative depicts the challenges to and climate of an alternative form of realism in the art-world as a new project for art’s politics and construction. Determinism Noir, Realism and Its Discontents calls upon the classic genre of noir narratives to situate themes of agency, mastery, rationalism and metaphysics. These ideas and images are generated in the nihilistic climate of alienation, itself borne out through the machinic, technological and capitalistic forces of the Twentieth Century. The comic presents three parts: first we see the formation of a project base to insinuate a rational determinism: A world of cause that is unpredictable but nevertheless, a pragmatic working environment; second we see a report, based on real life events, showing arguments from politics and the art-world that continue to voice the fear that it is representation itself that has blighted art’s real political purchase. The comic criticizes these arguments as having left art with either a naive commitment to an abstract and essential mythology of present-ness or an antirealist self-contortion that dispossesses it of power. The third part of this narrative re-joins the work of the epistemological detective work that is the exercise for this new realist project. Beech’s abstract story gels painterly construction, philosophical argument and political diatribe to extend her ongoing work. Here she argues that art must surpass the egotistic self-consciousness that have wrongly subtended claims to realism, whilst condemning those that aspire to exit realism altogether.

ARTMargins publishes scholarly articles and essays about contemporary art, media, architecture, and critical theory. ARTMargins studies art practices and visual culture in the emerging global margins, from North Africa and the Middle East to the Americas, Eastern and Western Europe, Asia and Australasia. The journal acts as a forum for scholars, theoreticians, and critics from a variety of disciplines who are interested in art and politics in transitional countries and regions; postsocialism and neo-liberalism; postmodernism and postcolonialism, and their critiques; and the problem of global art and global art history and its methodologies